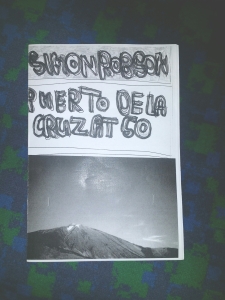 Simon Robson’s latest pamphlet, Puerto De La Cruz at 50, offers a variation on his last holiday-themed pamphlet, Marakech A-ha, which I reviewed last year. The travel observations of people, place and culture are present, as before, though the tone of the pamphlet is different. Here, Robson not only explores a journey abroad, but a journey through middle-age. The traveller seeks a quiet atmosphere; a sleepy town and a hotel tucked away up a mountainside where even the volcanoes sleep. Noisy young couples bring unwelcome distraction forcing the poet to reflect wistfully on his holiday alone:

Hotel Acuario (page 2)
…This way,’ she says,
the key to my room, balcony and toilet,
no sex, wild music, degenerate behaviour-
‘Oh no,’ I say…

The shortcomings of old age are faced honestly:

Saturday night in Puerto De La Cruz (page 7)
…Too many gradients, hills to negotiate, for a wheezing asthmatic middle-aged man like me…

-yet there is a desire against growing old with dignity:

Motorbikes are a recurring theme throughout. ‘Hell riders’ and ‘wild bikers’ bring noise, degenerate behaviour and excitement to the town. The admiration for ‘marauding motorcyclists’ and those ‘speeding toward their own demise, destruction’ in poems such as ‘Bang Bang’ on page 10 suggest a rebellion against following the social norms that are expected in people of certain generations or age groups. Observations of ‘younger, well-dressed couples looking like tasty sardines in tinfoil shiny jackets’ show relief at not having to obey the rules of such social rituals and expectations. There’s no quiet acceptance of impending old age as Robson embraces the small comforts, if not the hedonism. ‘Bell whisky, Heineken beer… There’s going to be a riot… Well no’.