A toast with John Agard after GCSE Poetry Live 2016 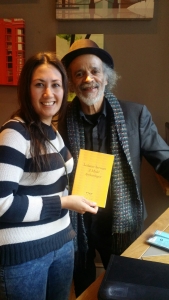 Yesterday I had the amazing opportunity to enjoy a drink with poet John Agard. My English teacher colleagues and I had attended the GCSE poetry live 2016 event at the Dominion Theatre in London and bumped into him at a pub around the corner at Tottenham Court Road. We talked poetry, of course, and I was honoured to have him sign my debut collection, A Model Archaeologist (Back issues available from online store, Meandi Books) with words of inspiration: 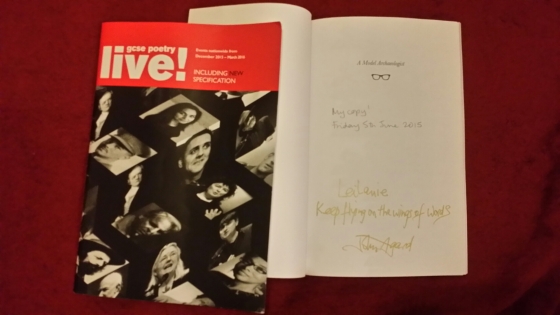 The GCSE poetry live 2016 event was held at the Dominion Theatre in London. Grace Nichols didn’t read this year

– she’s one of my favourite poets – but her poet husband John Agard, as always, had captivating words: that no matter what job you do in life, be it a Mathematician or a footballer, words will always be with you and so it is best to master them; that the poets performing (in addition to himself, Carol Ann Duffy, Gillian Clarke, Imtiaz Dharker, Daljit Nagra and Simon Armitage) use the same 26 letters of the alphabet as everyone else, but it is how you use them that matters. He described an example of a good-looking guy in a bar, all designer-clothes-and-six-pack and confirmed with the sea of 16 year olds that this would seem attractive; however, if he opened his mouth and began to babble, his sex appeal would be gone. His success at engaging teenagers from all over the UK and emphasising to them that poetry is not just about a bunch of blokes who have been dead for hundreds of years was inspirational. Lucky for my colleagues and I, we were able to meet the man himself and enjoy a toast after the event. 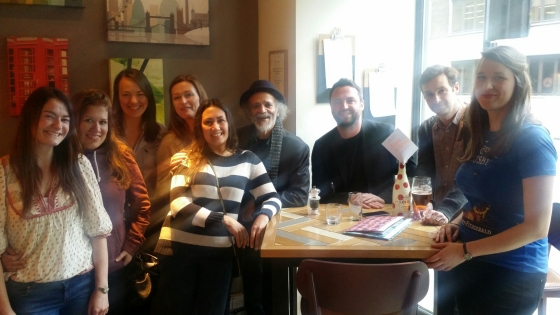