After 5 drafts, I’m down to the last 50 pages of my second novel. With any luck, this one could become my debut – more on the reasons for why my first novel is still doing the publishing rounds below. Here’s hoping! 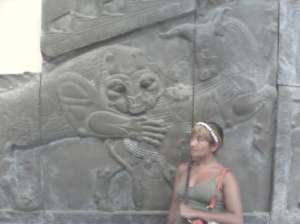 Researching a novel – tackling the beast!

The idea for my second novel popped into my head and originally I wrote it up as a 3000 word short story. A year later, armed with a few more more ideas, I began my research at the British Museum in the summer of 2013. The photo above is me tackling the beast of a new novel; if only writing it was as easy as gathering notes!

Draft 1 took 4 months to write and was completed in January 2014: basically getting my thoughts into a coherent plot.

Draft 2 took 2 months of revision and was completed in March 2014: essentially, working on character development.

Draft 3 took another month to complete by April 2014: finally ironing out plotholes. At this point, I thought the novel was complete – you can read my optimistic blog post here!

Draft 4 took 7 months and was completed in November 2014: a careful line edit to make sure there were no typos. But my fabulous editor and hubby, Joseph Robert, felt more work was needed on characterisation and so it was back to the laptop for another draft – and a detailed critique.

Draft 5 took 4 months to complete and was ready for a proof copy in March 2015 – after only 1 and a half years. However, day job stress put a dampener on this draft and it was archived for a year (sigh!).

Work on the final draft began in August 2016 with a vengeance; or rather, a red pen and a broken foot! Here’s my blog post on writing while injured – much mind over matter needed to get through that one.

And here we are in May 2017. Finally I can see the finishing line and can safely say that this time, my novel is really done. This time the difficult feat has not been a broken bone, but baby brain. Baby brain means one topic dominates all, and brain babies struggle as a result. Thankfully my story was pretty much intact from 5 prior drafts, so editing was straightforward. I’ll be working on my cover letter and synopsis shortly; the exciting birth of a new novel…and more!

Back to novel writing, before I stray off-topic (ahem!). As mentioned at the start of this post, my first novel is still doing the rounds with publishers. Since 2012, it has been submitted to 16 publishers and agents in the UK, mainly in London. Feedback has been positive: namely that although it is ‘creative’ and ‘refreshingly original’ it is effectively too experimental for a debut. I have been encouraged to write a more commercial novel for my debut – which I am hoping is the case with my almost finished second novel. It’s an accessible story that should appeal, hopefully, to adults of a wide demographic; although maybe not a read for kids. I did say I’d started this one in 2013, of course. Much has changed since then!

Posted by Leilanie Stewart on May 10, 2017 in Biography, Fiction, Novels, Publishing, Writing and tagged characterisation in novels, drafting a novel, finishing a novel, novel writing, plot development, writing and pregnancy, writing with an injury.